Page of Swords | The Tarot of Alexander Daniloff 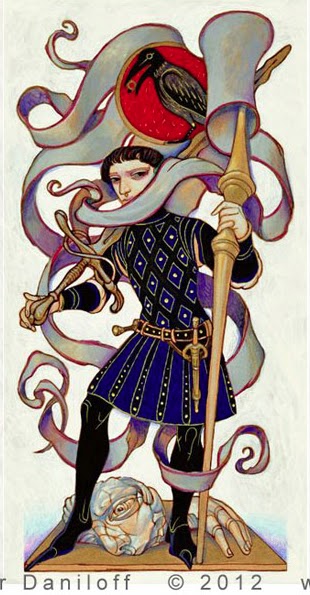 When I first laid eyes on this new Tarot deck by Russian illustrator Alexander Daniloff, I was terribly excited!  I was immediately sucked in by the characters and the colours; it’s a veritable medieval carnival of delights!


I had to know more!


So, continuing on my meme for the Page of Swords (see here, here and here for other Pages and interviews), I asked Alexander whether he would be interested in talking to me a little about his deck.


It’s a 78-card deck with 3 additional cards – one blank and one each offering variations on Force and Justice.  The cards will measure 141 x 73mm and the card edges are squared.


Let’s take a look at his Page of Swords.


I’m loving the raven in his banner – they are clever, cruel and entertaining birds, a bit like the Swords family altogether.  See how his banner partly obscures his face? I like that – it feels kinda sneaky – but what of the hand and head at his feet?


I put some questions to Alexander, the deck’s creator:

“I have always been fascinated by the symbolism and medieval emblematic, iconography of miniatures and frescoes.

“The Tarot for me have been a reason to immerse myself in a medieval atmosphere, crawl between the nobles and the miserable, oscillate between the Moon and the Sun, between Life and Death.

“I do not know use the Tarot, but interpreting a state of mind, a sentimental message that contains each Arcana I began soon to feel its magic. They gave me a common thread, a compass to connect remote past with today, to create a deck in the classic style, addressed and strengthened a saving irony to avoid the risk of rhetoric.”

Tell me about your Page of Swords:


“The Page of Swords is about espionage, secret service investigation……his face is hidden and a large sword on his shoulder is not immediately visible.


“I gave him a skinny black suit and a red circle on the flag to make him look like a Ninja! The circle is associated with the symbol of Pentacles – he uses it as camouflage.


“The Raven with  ring held in its beak is shown in the red circle – stealing.


“He has one foot resting on the broken head of a statue.  This is a reference to David and Goliath.  He gets what he wants by cunning, guile and unpredictability.  He can conquer brute force.


All the Pages are limited by the platform under their feet, despite the fact that they are in an open area.”

Alexander Daniloff is based in Italy and his work can be found here
He has a 22-card Majors only tarot currently available and he is just about to start shipping his latest Tarot, from which this marvellous Page has been taken.

Bah, my will is so weak! Have joined the TABI group order too 😉

I don't think that you'll regret it, Chloe *grin*

It's very medieval and so colourful! I love the astrological motifs on the Senior Court cards – they'll be getting featured at some later date!

oh gosh, looks like such a must-have for me
*off to check out his page*

I really really want it after looking at more sample, but it is so expensive :[

Bonkers – It is much more expensive than a commercially published deck. Maybe you can start getting your Christmas List together, starting with this deck, so that when December comes around and someone asks what you would like as a pressie, they might be happy to contribute towards the deck?

aaargh AAAARGH. you are tempting me SO much, you are eeevil, pure eeeevil

*mwhahahaha* I am stroking my white cat and looking out the window. Pondering world domination. Well, even if you don't buy it through the TABI order, you an always buy it directly yourself later. But you will mis out on the group 'squeeeeee' 😀

and, yes,…..I ordered it. Credit card is now groaning 😉

Its too beautiful NOT to get