This particular painting, attributed to Flanders-based French artist Sebastien Bonnecroy, features the usuals suspects – a hollow-eyed skull (to remind us of our mortality) surrounded by temporary things – the cupboard decorated by a skeleton holding an hour glass, the candle that burns down, the pipe that breaks, the clock that ticks out the hours of our lives (I actually typed ‘cock’), and a whole load of other symbols that trumpet the painting’s purpose:  YOU ARE GOING TO DIE.

Holding the thought that your end was looming at the end of any given sneeze… or pustulant boil, people would then gaze blearily upon their Vanitas paintings and rush out into the world to do good works and lead spiritual lives.  Also, infect people.

In this particular oil painting,  nestled in the middle of the arrangement of symbols is a set of Tarot cards.  The inclusion of Tarot cards may show the fleeting pleasure of gaming, alongside the fleeting pleasure of music (as shown by the musical instruments)…or does it indicate that by the time this painting was produced, 1663-ish people WERE using Tarot for divination and the exploration of our fates? 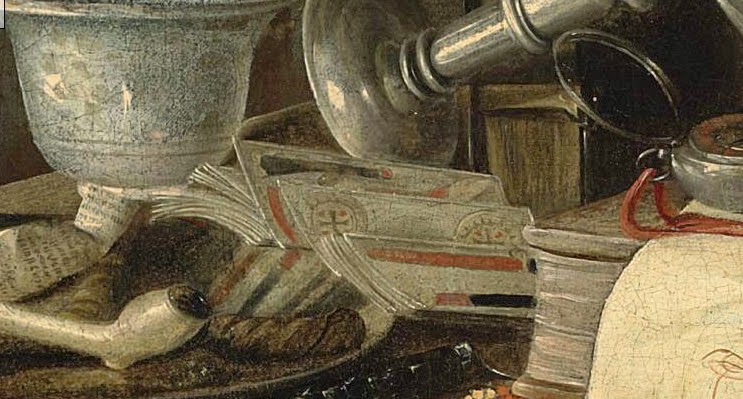 What do you think – gaming or divination?!

Maybe both – no one lived to tell the story!

Hmm, I'd say both gaming and divination are possible. After all, thinking about destiny is also pretty "veritas" material…

I think both. Cards had already been used for fortune-telling some considerable time before 1663. The Fortune-Teller was painted in 1510(ish) 🙂
http://commons.wikimedia.org/wiki/File:Lucas_van_Leyden_-_Fortune-Teller_with_a_Fool_-_WGA12921.jpg

A vote for gaming at this point, myself. If it were a century later, I might think differently, but the theme of temporary amusements (music and drink, etc.) makes me think gaming.