Last weekend I was lucky enough to be included in the line up of the World Divination Association‘s Virtual Conference. Amongst the stellar speakers was Caitlín Matthews who spoke to us about ‘frithing’ which is a traditional Scottish West Highland way of divining, using temporary features in the landscape – the flight or position birds, cattle, people etc. Caitlin provided us with a beautiful contemporary example of her own that included hammer strikes from neighbouring building work!

Being Scottish AND living in the West Highlands, I thought I’d give it a go.

On Monday evening I went out into the still-sunny garden and sat in my shed (aka the ladycave!) for a while, getting centred, trying to remember what to do, constructing the question for my ‘frith’ ….

But I couldn’t concentrate for the racket coming from outside.

In the tree behind the shed, a bird was shrilling out its alarm call, long and unmistakable. There must be a cat in the garden. I’m not a fan of cats around my song birds and I’d just buried two little bluetit nestlings who had perished that morning. There would be no more chicks joining them beneath the rose bush today.

I stepped out into the garden and looked into the tree. It was the blackbird’s alarm call and usually I can see the familiar long flicky tail and the yellow beak flashing amongst the leaves, but nothing. Not a bird, not a cat.

And still the alarm sounded.

I went back inside and tried to concentrate even harder, but the call was like an alarm clock that I couldn’t turn off.

Irked and irritated, I went back indoors, resolving to do it again once things were quieter.

It was Tuesday morning by the time realisation hit me like a lightning strike. My question had been ‘What should I focus on ….?’ and I didn’t get any further than that – nothing about my family, career (ha!) or anything else at all.

But the universe HAD delivered me an answer – the blackbird’s alarm call. The. Black. Bird. Alarm. Call.

It was #blackouttuesday and I’d received my answer and it was an alarm call.

Racism isn’t limited to the injustices that we see in the USA. Racism is alive and well in Scotland too. Click on the image of Scotland’s Justice Minister, Humza Yousaf, to see the BBC Scotland article.

Unbelievably, despite being University educated (Glasgow, the best, of course!) and knowing about the city’s role in the tobacco trade, I had never EVER made the logical jump from tobacco to slavery. I know, I’m bloody ashamed of myself to admit it too.

I’m getting myself educated. I have my book on order: Recovering Scotland’s Slavery Past. And I have procured a copy of ‘It Wisnae Us’ by Stephen Mullen which is EXACTLY what I want to read.

Sign up for the Hallowquest newsletter to keep up to speed with what Caitlin is doing. 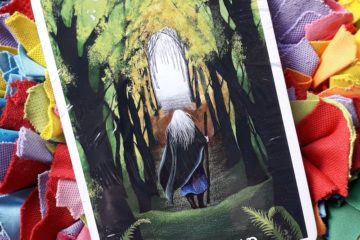 Sovereignty | Wisdom of the Cailleach

Sovereignty, the second Old Woman from Jane Brideson's Wisdom of the Cailleach cards.

There are a few lunar oracles about, but this reprint of the Moon Oracle by Caroline Smith and the late John Astrop is well worth exploring. Originally published in 2000, it has been given a Read more…