The Fey Tarot published by Lo Scarabeo is one of my favourites, even though it’s jam-packed with fairies, I confess.  I find that it’s a great deck to read with, especially if you’re a RWS devotee.

Today I’m presenting the King and Queen of Swords to you *sweeps a long, low bow*…..

I’m a little bit in love with this King of Swords, if I’m honest.

Even though the wind buffets him relentlessly, blowing the autumnal leaves hither and thither, he remains at his post.  The scars of battle (life? love?) have marked him and even on his throne he is clad for conflict.

His hands are encased in armour- even his finger tips – can he no longer feel anything (emotionally? physically?)  Does he need to remember that you don’t need your armour at all times, that sometimes it’s safe to let yourself be exposed? Even if it leads to more wounds?

His consort is the Queen of Swords.  Her hair tumbles around her face and shoulders like water and she gazes out at us with a serious demeanor.  Unlike the king who is in some desolate wilderness, she is in a built-up area – civilisation.   And indeed this Queen is erudite, witty, clever and – I suspect – an excellent dancer and chess player.

If the eyes are windows to the soul, what are the windows in this card? The eyes of the soul?  Although she is beautiful, her blue lips and skin tone make her chilly-looking – ‘Noli Mi Tangere‘

Does she look like the sort of woman that the King needs to cuddle up to?!

Maybe her sword, emblazoned onto her third eye, cuts her off from the King.  Introspective and thoughtful, I can imagine the verbal traps that she could set for him (‘what do you mean my bum doesn’t look big in THIS? Are you saying that it looks big in other things?’)

Even when you switch the King and Queen around, there’s not much change in the tension between them, is there?

The Fey Tarot has colours allocated to the suits and Swords are allocated red – something that I associate more with Wands, to be honest.  The passion of red doesn’t really suit the cerebral approach of the Swords family – but here, I think it works on these two cards.  I think their love of order and of duty – doing The Right Thing, just because it IS the right thing – doesn’t mean that they don’t have strong passions – far from it.  And the red border reminds me that they are passionate people.

But I wonder where that leaves them?

Perhaps if I got into full Queen of Wands mode, I could persuade him to come down from that throne and step out of his armour?!

I LOVE this deck! Just posted a video review of another deck Riccardo Minetti authored – he is seriously good 🙂

Anyhow, what I notice is that, although the King's armour covers his hands entirely, it is a series of uneven chunks over his chest, with a red shirt underneath. Perhaps that, although he tries to control everything and keep a very tight rein on stuff, his passion shows through and does leave him vulnerable? Interesting, it does make him seem quite Queen of Swords-y, as Mojo suggested…

Oh, forgot to say, the Queen looks something from Avatar, dontcha think?

OMG Ali, Thank you so much for looking at these two, they're perfect!! I'm even loving the deck, might have to take a look further…..(Oh dear..sold the kids, got reserves for the dogs, might have to sell the shed!!LOL!) I'm feeling the red is for danger, touch, interact, scorn at your peril? Its strange that you see the King with battle scars as I always feel the Queen has them but hides them well.
Anyway, love it, thanks again.
Mojoxxx

Yes, she does the Two Ties dilemma very well 🙂 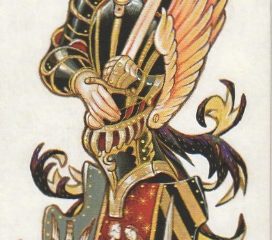 My 2020 Court Card is the Knight of Swords; a very ‘airy’ character who is very nimble intellectually. This Knight is quick to grasp new ideas and concepts but doesn’t have a lot of ‘stick-with-it-ness’ Read more…

I thought I’d share some more little snippets from my forthcoming Court Card book on the DNA of the Tarot Court – never overlook the importance of the image itself, it can contain a barrow-load Read more…